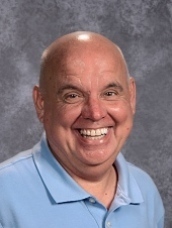 Mr. Bobby Herzing has served the Bluford community for the past 22 years.  He has been employed as the school counselor at the former Webber Township District and now the consolidated Bluford Unit #318.  In addition to serving as the counselor, Mr. Herzing served as the Athletic Director for several years.

Mr. Herzing really enjoys working with the staff to help students achieve their goals.  He helps coordinate the annual Alumni Scholarship Fish Fry each year.  This event helps raise funds for student scholarships each year.  Some of Mr. Herzing's fondest memories include when he sees students after high school.  They often share with him how those scholarships helped them achieve their goal of earning a degree.

Outside of school, Mr. Herzing enjoys gardening as well as watching all kinds of sports.  His favorite teams include the St. Louis Cardinals and Kentucky Wildcats!  He has a goal to travel and see as many states as he can.